John and Yoko released a pair of experimental albums in 1968 and 1969. The four Beatles had their last join recording session for the song The End in August 1969. In September, John announced his intention to leave the Beatles without indicating if the separation was permanent. He and Yoko released The Wedding Album two months later.

Within the next year, all four of the Beatles completed and released solo albums. John’s first music album, John Lennon/Plastic Ono Band, came out in December 1970 and included Give Peace a Chance and Instant Karma, as well as a pair of songs that did not do well on the charts.

In February 1971, John recorded songs in sessions that produced much of his Imagine album. He also recorded a single that was released before the album. John wrote Power To The People after an interview with two socialists that got published in Red Mole, a magazine put out by The International Marxist Group. John reported that the interviewers had some interesting ideas, and he wrote the song as a reaction to the article.

The record peaked at #11 on the Hot 100 in 1971. John later claimed that the song was “rather embarrassing” and quoted Hunter S. Thompson as saying that he wrote the song ten years too late.

Perhaps John was more of a prophet than he thought: the song became the theme song for the 2016 and 2020 presidential campaigns for Bernie Sanders!

I have collected older articles about Lost or Forgotten Oldies in my books.

Please visit my author page on Amazon where I sell my paperbacks, eBooks, and audiobooks.

You can even read the books for free if you have Kindle Unlimited! 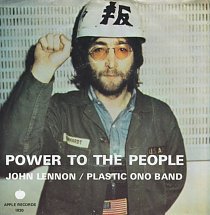 My eBooks Are $2.99 each each or Free with Kindle Unlimited:

LOST OR FORGOTTEN OLDIES VOLUME 2: Hit Records From 1955 to 1989 That The Radio Seldom Plays

LOST OR FORGOTTEN OLDIES VOLUME 1: Hit Records From 1955 To 1989 That The Radio Seldom Plays

Resisting the Challenges of the 21st Century: How Much Extra Does No Cheese Cost?

Nobody Wants Your Stuff: Resisting the Challenges of the 21st Century 2

Paperbacks and Audiobooks are also available

Get a free book here